The Mx4pro Development Tools is the most advanced software for the development of most complex motion control applications.

The Mx4 NC Executive offers a full range of CNC controllers, all of which use the Mx4 hardware family known for their patented parallel processing DSPs in the market. Mx4 NC Executive combines the advantages of a computer, motion controller, and a PLC all in a single unit. Establishing the basic design and features of the entire line, the NC Executive is a competitively priced high-performance controller designed on Win95 and NT platforms. Using open architecture design with standard PC components, this unit includes a plug-and-play 4-8 axis system controller. About Mx4 Family Open Architecture Because of open architecture design, Mx4 controller systems give you the highest degree of flexibility in designing your machine tool solution.

You can install a fully integrated and completely self-contained stand-alone system or you can select only the Mx4 on a PC/VME or a Multibus platform. Regardless of the selected platform and number of axes, all Mx4 products use state-of-the-art Multi-DSP technology and share the same programming language. The high-performance Mx4 motion controller boards are available in several different configurations to suit your computer control, performance, and price requirements. 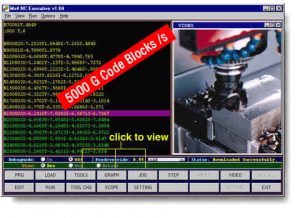 Take the bullet train to 64-bit application development with ActiveX Mx4 on Visual Basic, C, and Visual C++.  With our adjustable ActiveX Mx4 control (also referred to as an OLE or OCX control), you can create applications that communicate with all DSP Control Group control products. All communications to Mx4 are easily achieved with virtually no programming effort, allowing you to concentrate on your application.

What Is ActiveX ?
This software is a communication and building block library designed to provide efficient communication and application development to all members of the Mx4 motion computer control family. Unlike other forms of 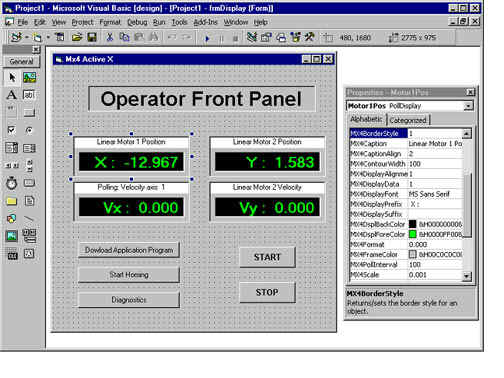 software libraries, which often require extensive programming time, OCX control is a new form of library functions that have revolutionized Windows programming. Along with the communication functionality, ActiveX Mx4 includes application building blocks including state variable and input/output monitoring as well as controller interrupt programming. In conjunction with the Mx4 DLL, the user has access to the complete range of Mx4 functionality, including program and data download utilities and real-time commands.

What Is An ActiveX/OCX Control?
The OCX controls are the latest addition to Microsoft’s OLE (Object Linking and Embedding) family, providing an astonishing compatibility to almost any development application software. The OCX controls, also referred to as reusable components, give you the convenient way to incorporate advanced functionality into your applications with minimum programming effort.

You Can Use ActiveX Mx4 With…
ActiveX Mx4 can be used with the 32-bit version of Visual Basic version 4.0 or greater, Visual C++ version 4.0 or greater, and just about any development package that supports OCX controls. In our documents, most of the examples and descriptions will be on Visual Basic, but they apply equally to Visual C++. Windows NT and Windows 95 are both supported.

What Built In Functions Does ActiveX Mx4 Have?
With ActiveX Mx4 and the Mx4 DLL, we have added many useful functions that enhance your capabilities. A partial listing of commonly used functions (or, more technically speaking, methods) include:

ActiveX Mx4 is one of several special development tools which are aimed at making Mx4 “Human-Machine Interface” (HMI) applications easier to create than ever before.  If you are using Visual Basic or C++ to create an Mx4 HMI, ActiveX Mx4 and the Mx4 DLL will put you on the fast track to application development. In less than a few minutes, you can have a Visual Basic program running and communicating with Mx4.